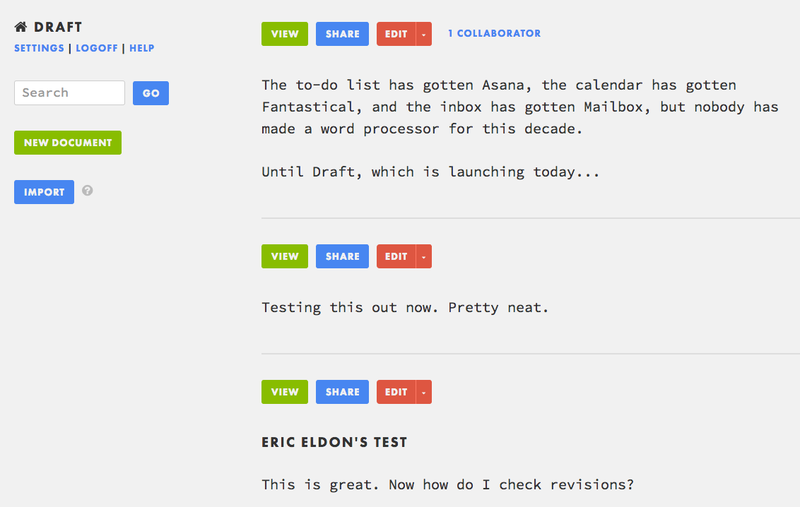 The to-do list has gotten Asana, the calendar has gotten Fantastical, and the inbox has gotten Mailbox, but nobody has made a word processor for this decade.

Until Draft, which is launching today to solve major problems with Google Docs … in ways that make me nostalgic for my own startup, WriteWith.

Draft offers clean saves of drafts instead of the usual autosave jumble, clear version control between multiple users, easy importing from popular file services like Dropbox and Evernote, and something pretty unique — an editing service.

Built by one-man Y Combinator team Nathan Kontny (previously the cofounder of Inkling and Cityposh), the web app puts solo writing first. Its interface makes a point of looking nice, with the words you write appearing in large, plain-text font on a light-gray background.

Read the full article on Techcrunch and Lifehacker

This is the story of Watsi a non-profit that found itself in the care of a startup accelerator called Y Combinator (YC). YC normally works with for-profit companies focused on technology innovation, and has generated successful businesses worth billions of dollars. A startup accelerator backing a non-profit can be compared to the unlikely scenario of a tiger raising a bunny.

Read the full article on TNW 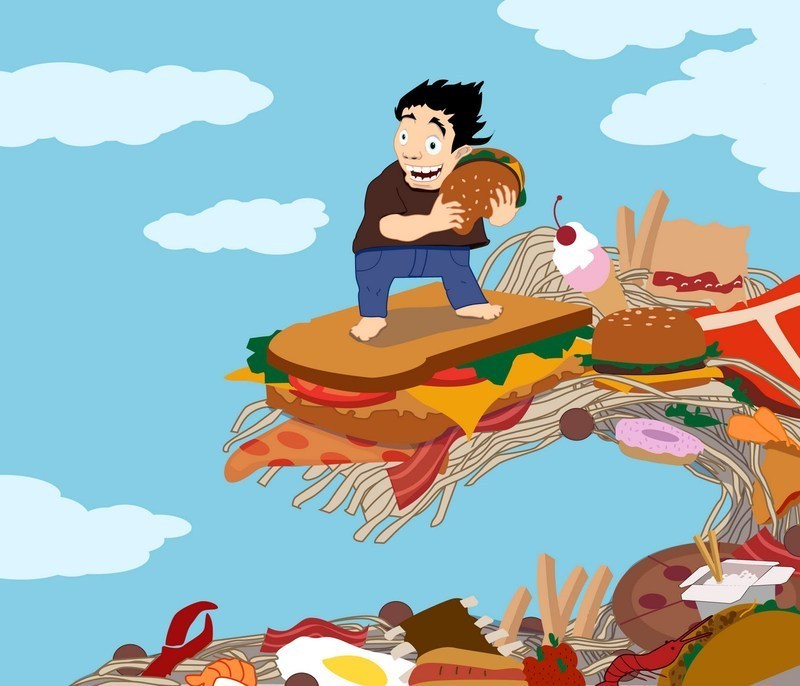 Five years ago I moved to the Bay Area because I wanted to start a company. I came here armed with that single goal and the education of a dozen Paul Graham essays. To me, determination has an almost magical quality. I’d always felt that with enough of it I could do absolutely anything.

People say startups are risky, but for me, working at a job my entire life seemed like the worst possible outcome, so starting a company was the least risky thing I could do. I think that’s what people mean when they talk about founders being a little crazy. I realize this is an unusual personality trait.

To fund my adventure, I sold my car and bummed a ride to the Bay Area. I spent two days on the Berkeley public library computers looking for a place to live. I convinced a retired dentist to give me the keys to a cheap studio in El Cerrito before he’d seen any money or even gotten my signature on a lease. Looking for my apprenticeship, I started applying to startup jobs.

It turned out that 21-year-olds with no degree or marketable skills weren’t in great demand. As luck would have it, a paper I picked up told me it was the worst summer for jobs in a decade. Eventually my cash ran so low that I walked to downtown Berkeley and went into every business with an open door asking for job applications. Even there the response was abysmal. A week later I had exactly one offer. It was from Ben & Jerry’s, which I accepted. 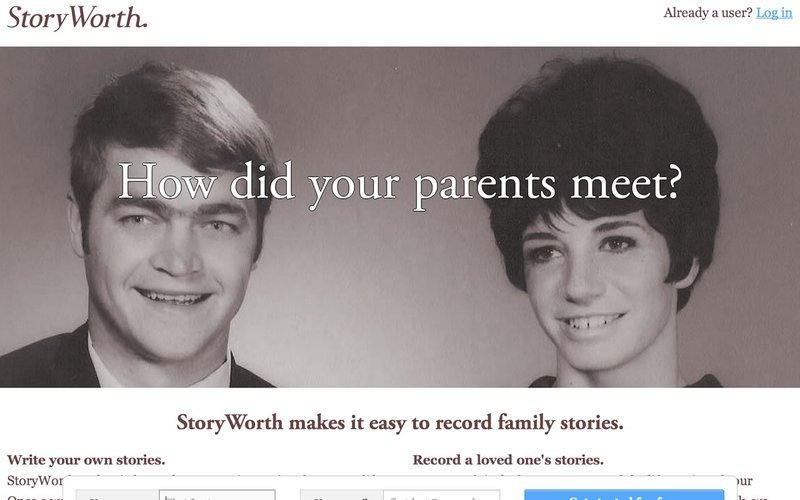 “Mobile-first” startups geared for savvy smartphone users are all the rage these days. But here is an “email-first” startup aimed at older people who don’t necessarily care about technology.

And if it works, it might have the most emotional resonance of anything out there.

StoryWorth aims to create archives of personal stories told between generations. The premise starts with the question, “How well do you know your parents?”

And the answer, for nearly everyone, is: I could know them better. For people with elderly parents, that’s all the more acute.

If you want access to the best features of Dropbox or one of its many competitors—automated file syncing between computers, a way to automatically keep old versions of your synced files, etc.—but you don't want to keep your stuff in someone else's cloud, AeroFS is a promising service. It can provide file syncing for many clients using your own local server (or, for businesses, Amazon S3 storage that you have more direct control over). When we last wrote about the service, it was still in an invite-only beta, but a message that went out to users last night declared that this beta is over and that the service is now open to anyone.

Visit AeroFS to try it now

Imagine an electric vehicle that can get you to work -- or anywhere in a six-mile radius -- quickly, without traffic frustrations or gasoline. Now imagine you can pick it up and carry it with you. Yes, this souped-up skateboard could change the face of morning commutes.

Y Combinator Close.io, a startup that aims to improve communication and customer management for sales people, has raised a round of funding from Bebo co-founder Michael Birch, SV Angel, Spark Capital and David Tisch.

Close.io was born from ElasticSales, a sales-as-a-service platform that provides both software and manpower that lets startups outsource their sales functions on demand. ElasticSales pivoted from SwipeGood last year. Elastic actually developed Close.io in-house to increase the performance of their sales people. But as co-founder and CEO Steli Efti explains, the startup saw a potential in marketing and developing their “secret sauce” for clients.

Y Combinator-backed payments startup Balancedhas closed out a total $3.4 million seed round, thanks to the addition of $2 million in new funding from investors such as Andreessen Horowitz, CollabFund, and a bunch of angels.

The funding is somewhat strategic, as the startup is looking to help leverage the expertise of the investors involved to help grow its payments business for peer-to-peer marketplaces. On the Andreessen side, for instance, the funding was led by general partner and former PayPal president Jeff Jordan. And investment via CollabFund could help it to get in front of other companies that are part of that firm’s portfolio.

That’s important, because Balanced was built to help marketplace companies like TheFancy, Kitchit, CrowdTilt, Copious, and Zaarly manage payments between two different sets of users. On the one hand there are buyers, for whom Balanced provides white-label payment processing. And on the other hand there are sellers or service providers that marketplaces need to make payouts to. In between there are various rules and regulations that Balanced needs to keep track of, and the company provides services like fraud prevention and holding funds in escrow while waiting for goods or services to be delivered.

The 30-year-old is the founder of Airbnb, a website that lets you turn your home into a pseudo-hotel, renting it out to business or vacation travelers on a budget looking to find a couch, room, or even a whole house to stay in.

The idea, which may sound crazy to some, has taken off since Chesky started the company five years ago: 300,000 people have rented out their homes on the site, and 4 million travelers have used it to find a place to stay in locations around the world.

He is seen as one of the driving forces in the new and rapidly expanding "sharing economy," in which more and more businesses are popping up based on the idea that people can share their resources. There are now a litany of startups based on this notion, from ride-sharing to office-sharing, and even pet-sharing.

"The stuff that matters in life is no longer stuff," he told TODAY. "It's other people. It's relationships. It's experience." 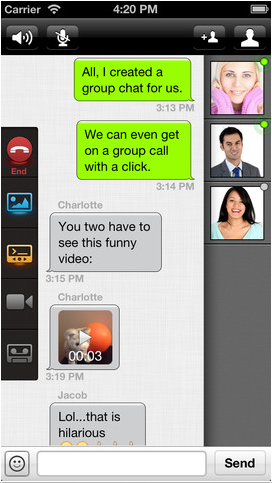 For a company that has somehow stayed mostly off the tech press’ radar, TiKL has had a pretty friggin’ good year.

With $0 spent on marketing, its two mobile apps, TiKL Touch To Talk and Talkray, have nabbed a total of 28 million downloads. After taking part in Y Combinator’s Winter 2012 class, they raised a $2.1 million Series A from some of the biggest names in the Valley.

Today TiKL is unveiling the other half of its business strategy: the Talkray API.

(Before we dive much deeper, a quick bit of background on what their apps actually do: TiKL Touch To Talk is a walkie-talkie app, bringing cross-platform push-to-talk-functionality to Android and iPhone. Talkray is a broader communications app, with things like group calling and voice mail.)

Using their new API, TiKL says mobile developers will be able to easily add text chats (both one-on-one and group chats), voice calling for groups as large as 25, voice mail, image and video transfers, and just about any other feature from the Talkray app into their own applications and games on iOS or Android.